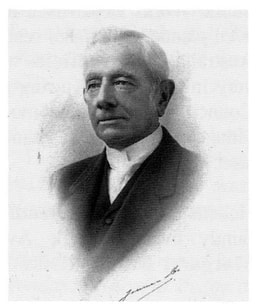 ​"Killara, and Aboriginal word meaning ‘permanent’, or ‘always there’, was the name given by James George Edwards to the suburb that developed around the railway station opened in 1899, between Lindfield and Gordon.

It is therefore entirely a creation of the 20th century.

Above: James George Edwards
​
Fourteen kilometres from Sydney, 365 feet (110 metres) above sea level and with a name that symbolises a feeling of permanence, Killara is often described as ‘a lush haven’, a quiet retreat', and area of ‘solid respectability’.

It stretches between the Lane Cove River and Middle Harbour Creek; its northern boundary used to run from Essex Street across the highway and along Greengate Road (though this has since been extended north by several streets on the eastern side of the artery), and its southern boundaries are Fiddens Wharf Road and Treatts Road.

We have to thank Edwards for Killara. For it was he who had he tenacity, the courage and the financial means to create a garden suburb, with large allotments, little commercial development and no industrial sites at all.

He is justifiably called the Father of Killara. Despite inevitable changes in the 20th Century, Killara retains its air of respectability and homeliness. 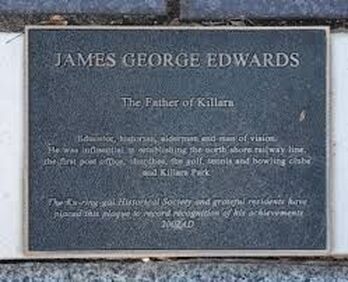 The inscription reads:
JAMES GEORGE EDWARDS
The Father of Killara
Educator, historian, alderman and man of vision.
He was influential in establishing the north shore railway line, the first post office, churches, the golf, tennis and bowling clubs and Killara Park.

The Ku-ring-gai Historical Society and grateful residents have
placed this plaque to record recognition of his achievements
2002 AD
​Compiled by Francie Campbell,
Teacher-Librarian
Killara High School